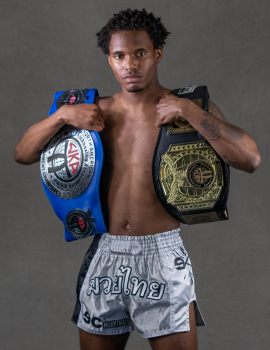 Ron “Black Diamond” King III’s started training Muay Thai when he was 11 years old. By the time he reached his 17th birthday he had already had 18 amateur fights and was one of the most decorated teenage fighters in the country. He has won the WKA North American Muay Thai Championship, represented the United States in the WKA World Championships and fought in Iowa for an invitational only tournament for TBA. All of this while still in High School!

While attending West Springfield High School he also joined the wrestling team and competed in the Regionals his freshman year. We are extremely proud to have Ron with us at the Academy and expect great things from him in the future.

Wrestling
Coach Ron was part of the wrestling team at West Springfield High School.  He competed in the Regional Championships each year he competed winning nearly all of his matches with takedowns.